What's on your mind?

Why didn’t they let her take maternity leave when she’s was pregnant because you supposed to do that when you pregnant so I’m wondering if that’s was literally a plot hole or device for her character to be in high school awhile she’s was pregnant then?

Okay I have a question for my fellow Gleeks? Why does everyone hate Ryan Murphy. I mean he isn’t my favorite person in the world (mostly due to choices he made on the show like character arcs and stuff like that). But I noticed he gets a lot of hate. And I feel like not all the cast members like him either, well besides Darren and Lea. But still why does everyone hate him or is it just me who thinks that? 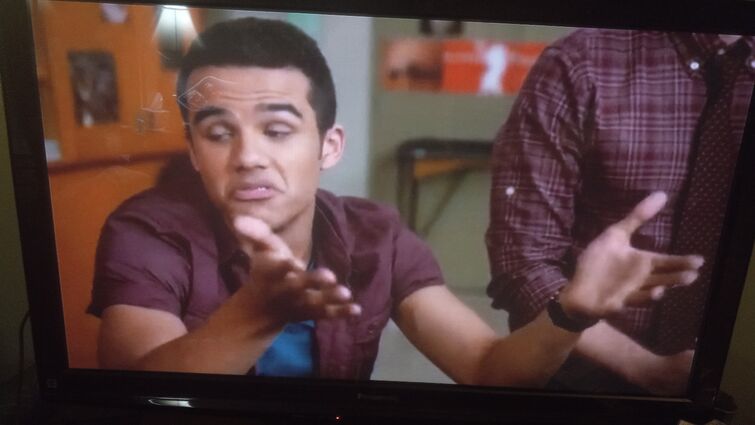 Okay, so I have a question?

Whats Your Opinion On Glee?

Like to me at the start is was okay and continued to get better until mid S4, and went down again. What’s your opinion on the fifth and sixth season? To me without Finn, it was just different. I didn’t like how they continued the previous New Year and Rachel got her part in Funny Girl. To me it was just to soon. That was her second Broadway audition, like it takes people years to get at least a speaking part on a Broadway show.

Then season six, after all of season five, I wanted a short season (like maybe 15-16 Episodes), because 13 was just to short. Like why did they have to get rid of the S4 newbies? They were good, the S6 newbies were not good to me. And I kinda wanted them to still go back and fourth between Lima and New York. I had gotten so use to them doing that I started to like it. And I hated Shue with Vocal Adrenaline.

If it was me-Season Four would had ended the 2012-2013 school year. Then next season it shows the S4 newbies in there senior year, not transferring them. I think Blaine and Sam should of taken over the glee club. They would of been a great duo. I think Shue should of just left to. And in New York, they should focus on other characters besides Rachel. Like Kurt Santana And Mercedes. And there should of been no sixth season.

So, I have this tradition of naming things after deceased fictional characters (a list is available upon request). I have decided to name my camping chair after Finn because it is supportive. Glee helped me become myself, especially Finn, because he was a "normal" guy and it was ok to join choir.

Artie is like the Top 6 main characters & Vocalists, not sure why some say he’s side-lined too much :/

1. His voice literally goes with anyone’s, Don’t sleep on the subway, is so good video wise, story-wise and of course vocally, he’s not singing in his wheelhouse, he doesn’t usually sing theatrical like, but it’s so good, he really pushes himself vocally, and he’s probably sung in the most genres next to Rachels songs.

But this post will be different because this time I actually more want to praise the creation and stability of his character.

I really gotta give credits to the writers, because having a character portrayed with a disability is something I feel really passionate about, And the best thing is…

2. He was ALWAYS wheelchair reliant, and his Disability was never “cured”:

I worded it like that because I know we have special episodes where we see him walking or dancing in dream sequences – Which are always enjoyable to watch.

I like that there was no “magic cure” where I know many shows would’ve made the character have a miraculous recovery, this possibility was teased in the Christmas episode where he got those crutches (I liked watching it and seeing the hope, but I was almost mad, because I expected the next episode to see Artie walking like he was always able to) But I very, very much appreciate that this wasn’t the case. Having someone who’s always needs a wheelchair and remains that way, to keep the representation makes it more real, and in a way comforting for those with disabilities.

3. He’s not known for as “The boy in the wheelchair” (and the character wasn’t used to downgrade or humiliate wheelchair users) Obviously at first they were all known for what made them a minority - that was the point, but I think that Glee does a fantastic way of letting you see the person behind what makes them different. I like that he’s literally just a normal boy, And there was nothing stereotypical or offensive about his disability, I’ve seen way too many shows that really have a poor portrayal of disabilities, and even when they’re trying to give a good act, it looks disgusting and stands out to much, or their like “Aw poor little wheelchair kid” that’s what I like about Artie, they don’t hide him, and they don’t make him stand out, unless it’s to see him shine. – He’s just like everybody else. And he can love life too.

4. Representing something that actually gets the least representation, I’m always hearing people get upset about wanting more characters with a certain representation, but for me it’s sad no one ever talks about disabilities, I mean I think it’s very strange when I watch high school shows and there’s never even a background star in a wheelchair or any other physical disability, and then Glee came out and had one of its main stars wheelchair-bound and he lasted the full 6 Seasons, Some of my friends I very happy about that 😊

5. The mere fact that he was in it for the full 6 Seasons

6. Never leave a man behind: I just love how his fellow Glee Clubers, are there for him when he needs it and helping him just becomes second nature. – Finn helping him and sympathising with him in the Glee Actually episode, and Finn not wanting Artie to feel ashamed that he needed help, whenever the guys carried him up the stairs – Which did look hilarious tho.

Typically your friends leave you after you finish high school. I love that everyone remained friends with him, it broke a typical mould.

7. Reminding us he still struggles: I admire that Artie was never the kind of character that made it look like his condition is the worst thing ever or that he could never fit in. But he still does have his struggles; in Dream on, Wheels, when he was getting his hopes up about “the cure” when taking to Emma about it, when he fell out of his wheelchair on the slope, trying to catch up with everyone in the fast pace of New York. Getting Mugged on the Subway. Etc. It’s easy to forget that Artie doesn’t have struggles that come with his condition, and I think it’s really important to show them, without having it in every single episode.

So I’m stoked with Kevins Portrayal and the writers inclusion

I'm almost done with my rewatch of Glee and just finished watching the episode with sectionals and tbh I don't like how Sue throws the competition as VA's coach. Like if she genuinely put effort into the competition it would've made it the perfect ending to Will and Sue's rivalry as ND and VA perfectly represent each of their ideals and teaching methods, it would've been a literal fight to settle once and for all whether being encouraging or being brutally honest is better. Instead, it felt empty to me when ND won since it was against a team destined to lose and another gimmick show choir. Idk what other people think.

If you have other comments, please put them in (parentheses) or [brackets] or {these squiggly things}

So hey there! Im Elias! I left a while ago, but I'm back now. My favorite character is Santana, and my favorite ship is Blurt.

I just started season 5, finishes the first two (Beatles) episodes. The quarterback is next, and I know what's gonna happen 😥😢😭

I think that we should pick some new songs for the glee cast. What songs do we want to use. Here are my choices.

Turn on the radio: Terri Scheuster

As long as you’re mine: Marley Rose/ Ryder Lynn

She's the biggest crybaby to ever exist but she acts like Tina is the annoying one for crying yeah I love her lack of self-awareness so much... my stupid and ridiculous baby 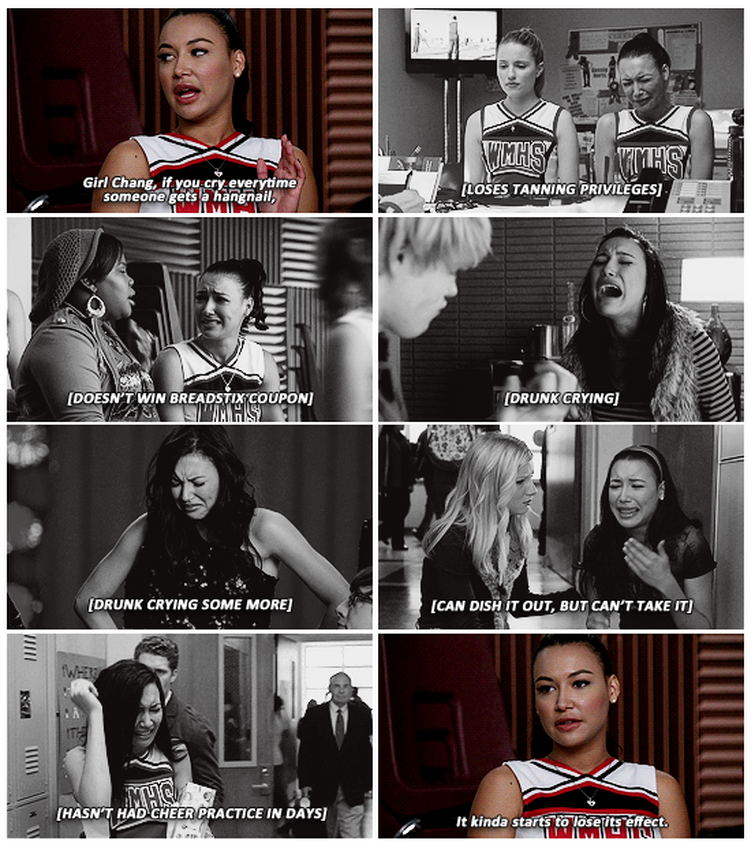 Probably my most shortest post. Props to me lol