Lima, Ohio
Breadstix (often stylized as BreadstiX) is a popular restaurant that appears in many episodes of Glee. It appears to be a parody of the Olive Garden chain of restaurants.

The majority of the dates that the characters go on take place at this restaurant. Sandy is commonly seen working there as a waitress.

A voucher for 2 was given as a prize in Duets, the fourth episode of Season Two, which was won by Quinn and Sam.

When Finn tells Mr. Schuester that Quinn is pregnant, they go for lunch at Breadstix.

The Rhodes Not Taken

Terri and Will are seen eating somewhere when Will considers inviting April Rhodes to be part of the Glee Club. Supposedly, the restaurant is Breadstix.

Finn goes on a date with Santana and Brittany at Breadstix where Santana complains about the food, and Brittany says there is a mouse in hers. They have the waitress take back the food. This marks the first appearance of James S. Levine's "Breadstix theme" music cue.

Kurt, Burt, Finn, and Carole go to Breadstix, celebrating the fact that Carole and Burt are dating. Finn notes that for a place called Breadstix, the breadsticks aren't very good.

An advertisement for Breadstix is seen on a sign behind a directory booth at the mall, which might imply that Breadstix is located in the mall.

Will pretends to like Sue and asks her on a date at Breadstix, but Will does not show up and the waitress is brutally honest to Sue, telling her that he isn't coming and that he in fact stood her up.

Will makes a competition amongst his Glee students and the prize is a free dinner for two at Breadstix. Santana claims that during one of her visits, she brought a wheelbarrow and began filling it with free bread sticks. When the manager tried to stop her, she complained to BreadstiX Corporate and that manager was subsequently fired, as the restaurant is apparently legally forbidden to stop bringing the customers bread sticks. Tina also notes to Mike that they have bottomless salad bowls that have to be constantly refilled until the patron passes out or leaves. When Rachel seems upset, Finn tries to cheer her up by saying that Breadstix has some great vegan meatballs. Quinn and Sam have dinner there at the end of the episode, which Quinn then says is their first date, despite previously declaring the opposite. Brittany also mentions their spaghetti to Artie, claiming that she wanted to order a really long piece of spaghetti so they could recreate the Lady and The Tramp scene. Brittany also claims that she has been practicing nudging a meatball across the plate with her nose. Brittany is later seen alone at BreadstiX, behind Sam and Quinn, miserably nudging a meatball across the plate with her nose.

Puck, Santana, Brittany, and Artie go on a double date. Puck decides to Dine-N-Dash but Artie's conscience causes him to pay the waitress, including giving her a tip. Puck abandons Artie after he finds out, and leaves with Brittany and Santana.

Blaine, Kurt, and Mercedes have dinner together at Breadstix. Kurt and Blaine talk about politics involving the gay community (such as Prop 8 and Don't Ask, Don't Tell) and Mercedes seems to zone out. She asks for tots from the waitress Sandy. They supply them due to the demand from McKinley students because Sue banned the tots.

After many attempts, Puck successfully asks out Lauren for Valentine's Day dinner at BreadstiX. Later, Puck gets stood up and he makes out with a waitress. Sandy then stops the making out and makes the other waitress get back to work.

Blaine, Kurt and the Warblers perform Silly Love Songs for the patrons at Breadstix; among them are a few members of New Directions: Puck, who is with Lauren, Mike, who is with Tina,Artie who is with Brittany, Rachel, Mercedes, Sam, and Santana.

Kurt and Blaine go out on a date at Breadstix in which Kurt asks Blaine to be his prom date. After some hesitation due to a bad experience in his past with school dances, Blaine agrees to attend prom with him, much to Kurt's excitement.

Sam, Mercedes, Rachel, and Jesse go out to dinner at BreadstiX before prom. At BreadstiX, Quinn and Finn are shown as well and Finn appears to be jealous of Jesse. The two leave and straight after the scene of Breadstix, the prom starts with Friday.

While eating a large bowl of pasta, Shannon Beiste mentions that Breadstix delivers, which is something she is very happy about.

Santana and Brittany go on a date to BreadstiX. Santana asks Brittany if they're dating, to which Brittany says that she thought they were since the beginning of the year.

Breadstix is mentioned after Brittany, Santana and the Cheerios are introduced for the Christmas Special. We also see that they have a logo.

Becky and Artie go on a date to Breadstix and have an amazing time. Artie is later criticized for going there with her.

Later in the episode, Finn, Rachel, and Kurt eat dinner there and discuss their futures.

Sugar has her Valentine's Day party (The Sugar Shack) there and it is where Kurt discovers his secret admirer is Dave, not Blaine. Dave confesses his love for Kurt, but he has to decline for he's in a relationship. After lots of debating, the God Squad accepts Santana's request and serenade Brittany with a performance of Cherish/Cherish. The next song is a fun performance of Love Shack by several members of New Directions.

Cooper and Blaine go to lunch since Cooper's commercial is on break and he is back in town. Cooper practices using foreign accents on the waitress when ordering, telling Blaine it is a great acting technique. Cooper goes on the criticize while they eat, which causes Blaine to confront his brother about the way Cooper has always treated him ever since they were young boys.

When Kurt is talking to Isabelle at the Vogue.com HQ, she explains that she has visited BreadstiX before and that she had food poisoning from a breadstick. At first, Isabelle forgets the name of the restaurant until Kurt says it. Kurt is surprised that she has actually been to Lima and been to Breadstix as she is a New York manager of Vogue, and Lima is not a place for those sort of people.

Breadstix was used as the location for the Left Behind Club meeting. Kitty leads the group and declares a fake rapture. Kitty tricks one of the members, Dottie into going to the bathroom to help a Japanese woman, and then gets the rest of the members to follow along with the prank. Dottie returns, panicking, and Kitty calls her out. Everyone returns to the room to see Dottie trying to breathe. Santana and Brittany start a little discussion about their relationship.

Jake and Puck return to Lima and later have a Hanukkah dinner together at Breadstix along with their respective mothers. The dinner goes badly at first, as the two women resent each other, but Puck and Jake convince their mothers that all four of them have a common bond: they were all placed into a difficult situation by the same man. The women begin to talk and start to bond before long.

Ryder and Kitty are shown having dinner and exchanging personal stories to each other about their experience with being molested.

Kurt and Blaine are seen having an interaction with Jan, the jewelry saleswoman that Blaine met, and Liz, her long-term wife. In this scene, Jan goes on one bended knee and proposes to Liz, asking her if she would legally marry her, and she says yes, and everyone cheers for the two, while Blaine looks at Kurt, attempting to want to do the same thing to him.

Quinn and Biff are shown discussing their relationship, and shortly after Santana, Mike, Artie, and Puck join them. They reveal some not so favorable details of Quinn’s past, such as the time she dyed her hair pink, got a Ryan Seacrest tattoo and became a “skank” her senior year. Quinn tries to convince Biff they are only joking and sends him to the car for her purse. Quinn tells her friends that she is trying to present herself the best way possible due to Biff’s wealthy background, as if she married him she would be “set for life."

Becky and Darrell share a milkshake at Breadstix's while she tells him that she really wasn't in all them clubs, including Glee club.

Breadstix is a real place in New York City (NY), and is located at 254 8th Ave. However, unlike the BreadstiX we have come to know and love from Glee, it is quite small and has garnered negative reviews from its patrons due to the terrible food, deplorable customer service ("one of the attendants came to me and threatened me with a knife for not having paid at the register"), and deceitful cashiers. 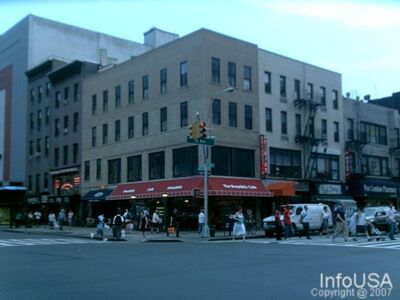 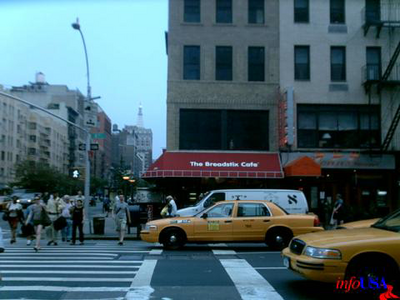 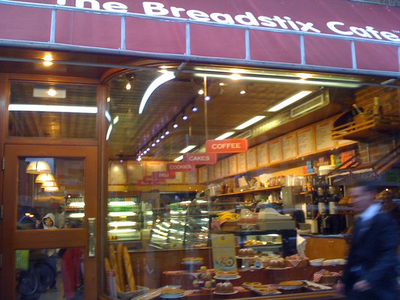 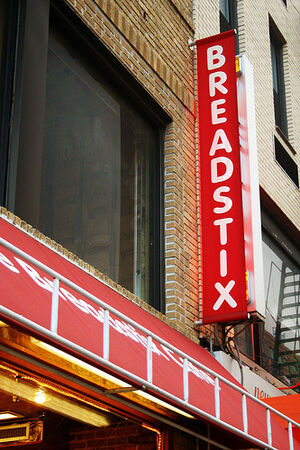