Callbacks is a piano bar in New York which is popular with NYADA students. They often sing on Friday nights. It is first shown in the episode The Break-Up.

Callbacks makes its debut here. Rachel wants to sing Give Your Heart a Break with Finn, even though he's not a NYADA student. Brody, who knows the piano man Pascal, says that since Finn is with Rachel he is honorary but Finn declines and suggests Brody to sing it with Rachel instead of him. When they finish, Blaine sings an acoustic version of Teenage Dream to Kurt.

Callbacks is mentioned by Kurt to Blaine, when he sees Blaine facial experssion and remembers the night he found out he cheated on him.

Kurt is having a very vivid fantasy about Into The Groove, the known Madonna hit, performed by him and his band Pamela Lansbury. In the fantasy, all the crowd is cheering and Callbacks is fully occupied. Later in the episode, the Band can be seen together at Callbacks, but they realize that only one person came to watch them.

After Kurt kicked out Santana and Rachel from Pamela Lansbury, he tells them that he, Dani and Elliott made a new trio band and they are invited to watch the performance, which takes place at Callbacks. Elliott, Kurt and Dani perform The Happening, by The Supremes. The crowd seems to enjoy the performance.

Into the Groove (Pamela Lansbury in Puppet Master)
(Dream sequence) 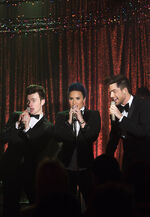 Retrieved from "https://glee.fandom.com/wiki/Callbacks?oldid=3442581"
Community content is available under CC-BY-SA unless otherwise noted.