Sheets-N-Things is a home goods store parodying "Linens-N-Things." Howard works there and Sandy is a frequent customer. Both Finn and Puck are hired in Funk, the twenty-first episode of Season One, to earn some money to pay back Shelby for the Vocal Adrenaline car tires they slashed.

In Funeral, the twenty-first episode of Season Two, Terri tells Will that she is moving to Florida because Sheets-N-Things is opening up a store in Miami and she will be manager there. The store isn't seen nor mentioned at all in Season Three. It was mentioned in Glee, Actually, the tenth episode of Season Four, during Artie's dream.

Sheets-N-Things makes its first debut in this episode. Terri shows Howard how to fold sheets. Will comes in to bring Terri lunch but fails to bring it correctly, because Terri is afraid she might get her diabetes back. Sandy is shown to be a frequent customer.

Finn and Puck are hired this episode to make some extra money in order to pay back Shelby. Ordered to do so by Sandy, Loser is later performed in the building. Later on, Terri promotes Finn to assistant-assistant manager, demoting Howard in the process.

In this flashback episode, Terri and Howard are seen at the store. 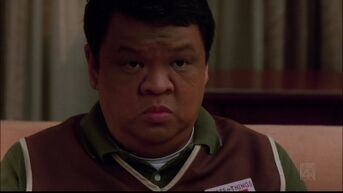 Loser (Terri, Finn, Puck, Howard, and Sandy with other Sheets-N-Things staff and customers) (Funk)
Add a photo to this gallery

Retrieved from "https://glee.fandom.com/wiki/Sheets-N-Things?oldid=3941092"
Community content is available under CC-BY-SA unless otherwise noted.