The Spotlight Diner is a diner in New York and Rachel, Santana, and Kurt's new workplace in Season Five of Glee. It is managed by a man named Gunther. The waiting staff, who wear red (and black, for the males), sing and dance for the customers.

Santana and Rachel arrive at the diner in their uniforms. Rachel is nervous, but Santana refuses to let her back out, claiming she almost had to show Gunther her left side boob to get her the job. Rachel eventually agrees that the job might be a positive experience. They later perform Hard Day's Night with the rest of the staff, in an attempt to impress the director and leading actor of Funny Girl.

Tina in the Sky with Diamonds

Santana tells Rachel that she booked a gig and even shows her the video. Dani is introduced and even jokes about her sexuality to Santana. She has worked there prior to Rachel and Santana since she likes to watch the sun raise and even watched it rise with Santana as they sung Here Comes the Sun. Kurt got a job there since Vogue.com doesn't pay and they make a pact to promise to stay in New York for two years - no matter what. Rachel learns that she got the Fanny part when Rupert comes in to order a whole cake with "Congratulations Rachel Berry, you are Fanny Brice." written on it.

Kurt talks to Rachel, Dani, and Santana about joining his band after Dani asked if girls can be allowed. Rachel passes due to it begin to soon and her Funny Girl rehearsals. Kurt is later seen asking a customer what he would like when it is revealed to be Elliott "Starchild." They would talk and Elliott would reveal why he came to New York, and Kurt would give him the spot in the band. Santana would come over and tell Kurt to stop flirting and get back to work and is delighted to see Elliott.

The End of Twerk

During the On Our Way performance, Rachel and Kurt are seen at the diner. Kurt is showing of his tattoo to his co-workers when Rachel joins them.

While Blaine sings Piano Man, the customers and waiters danced together.

After dealing with a difficult customer, Santana approaches Rachel and complains about how her life in New York is not what she expected it to be.

Rachel arrives late for work and is told by her manager she's been requested by table 5 which turns out to be Santana and Elliott. They have a short argument when a customer requests a birthday song for his wife, who is named Gloria. Santana and Rachel perform Gloria, while fighting for Elliott's attention.

Kurt announces to Rachel and Santana that he received the message that the New Directions had lost Nationals so the club is about to be disbanded. They look at him in shock.

In Fondue For Two, Brittany asks Rachel about her activities; amongst them, her job at the Spotlight Diner.

The restaurant appears in Tina's dream sequence, Chums, where it is shown that many McKinley High seniors got a job there after they all moved to New York together.

Artie goes on a date with Julie here, while Sam and Mercedes are also on a date.

Santana is seen cleaning the table when Mercedes arrived and gave her a contract to sign for their duet.

Rachel, Kurt, Artie, Blaine, Santana, Mercedes, Sam, and Maggie perform Take Me Home Tonight for all the people who came to Rachel's 'Broadway Bitches' event. An enthusiastic reporter interviews Rachel, Kurt and Santana about the event and says they'll show it on their website.

Rachel is seen here with Mary talking about Rachel's new show. Rachel tells her that the script isn't really about Rachel's true self. Rachel then sings Glitter in the Air as a way to show Mary her true essence. Mary doesn't like this idea at first, but then at the end of it tells Rachel that watching her sing made her happy and that has never happened to her before. Mary says that she will give Rachel's version a shot. 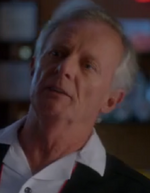 Dani: Waitress. Hired prior to Tina in the Sky with Diamonds.

Kurt: Waiter. Hired in Tina in the Sky with Diamonds. 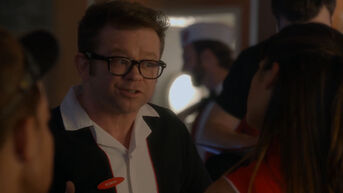 Ronny: Manager prior to Trio.

Rupert: Came in Love, Love, Love and Tina in the Sky with Diamonds.

Elliott: Came in A Katy or A Gaga and Trio.

Blaine: Came in Movin' Out and Old Dog, New Tricks. 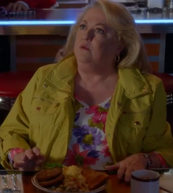 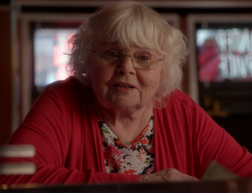 Retrieved from "https://glee.fandom.com/wiki/Spotlight_Diner?oldid=3975144"
Community content is available under CC-BY-SA unless otherwise noted.