View source
watch 01:33
Wiki Targeted (Entertainment)
Do you like this video?
Play Sound

The Troubletones is a glee club based at William McKinley High School. The club was started when Al Motta privately donated enough money to Principal Figgins to allow for the continuation of an additional show choir which heavily featured his daughter, Sugar. In Al Motta's request, Principal Figgins summoned Shelby Corcoran, all the way from New York, to direct the group. It is currently active in WMHS, along with 3 other glee clubs, including New Directions.

Sugar Motta has her father summon Shelby Corcoran to McKinley High to form a new glee club for her after getting rejected by the New Directions. (I Am Unicorn)

Finn invites The Troubletones to participate in the New Directions' assignment for the week, in hopes to get Santana comfortable with coming out. (I Kissed a Girl)

The four major Troubletones and Tina are ordered by Sue and Roz to sing a song about female empowerment to Coach Beiste after they make a joke about her black eye. The five girls sing Cell Block Tango to Beiste and an appalled Sue and Roz. They later learn Cooter hit her and sing Shake It Out to let her know they're sorry. (Choke)

Will has Quinn and Tina perform with The Troubletones at Nationals after Mercedes falls ill. Mercedes manages to get better in time for their performance of Edge of Glory. (Nationals)

They were reunited at Brittana wedding, and they sang with the moms I'm So Excited. (A Wedding)

It is revealed that the Troubletones are being revived by Will as a fellow Glee Club at the new William McKinley High School for the Performing Arts, alongside New Directions and a male-only mirror of the Troubletones known as The Duly Noted. (Dreams Come True) 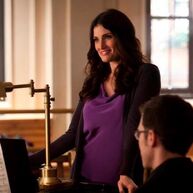 Shelby Corcoran:
Director. Hired in I Am Unicorn. Resigns in Hold on to Sixteen

Sugar Motta:
Joins in I Am Unicorn. Quits in Hold on to Sixteen.

Mercedes Jones:
Captain. Joins in Asian F. Quits in Hold on to Sixteen.

Santana Lopez:
Joins in Pot O' Gold. Quits in Hold on to Sixteen.

Brittany Pierce:
Joins in Pot o' Gold. Quits in Hold on to Sixteen.

Quinn Fabray:
Rejected in Mash Off. Temporarily joined in Nationals.

(Arranged in the chronological order of joining)

Note: Only known members are listed.

What Doesn't Kill You (Stronger)
(as New Directions)

Edge of Glory
(as New Directions)

1/132
Community content is available under CC-BY-SA unless otherwise noted.
Advertisement