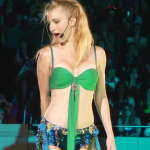 Pretty much done here. Bye, everyone!

All photos I put on my page came from my own camera.

Outside of my Glee interests, I'm a scientist by trade and a huge geek in the rest of my life.

I'm going to stop myself before I start listing all of my interests. No one would get anywhere else.

I was a casual Glee fan until BICO happened. Then I went insane during the hiatus until the Superbowl. In the year that has followed, I've flown across the country (~5000 miles/8000 km round trip) to NY for just 27 hours to see Glee Live for the last two US shows in June 2011, and I camped out all night (11.5 hours) for the Glee panel at San Diego Comic-con in July 2011. I also went to New York to see Darren Criss in How to Succeed in Business Without Really Trying in January 2012. I also managed to get a 4-day pass plus preview night to San Diego Comic-con 2012 and stayed in the room all day (5 AM line up for 5 PM panel) to secure a good filming location.

My Glee live photos can be found here.

My Comic-con 2011 photos can be found here. (includes non-Glee stuff)

My videos from the Glee panel at Comic-con 2011 can be found here.

My videos from the Glee panel at Comic-con 2012 can be found here (essentially complete). You can read about that whole experience in my blog here.

If you want to use anything from my content, please just ask me through those sites. I'm generous, and have historically released things, but I do like to actually be the one to grant permission.

I've been a contributor on Wikipedia for years. I finally decided to create an account over here mostly so I can fix errors that just nag at me (mostly grammatical) and so I can get rid of unsourced junk when I see it. I'm a pretty reasonable person. I have nothing against any ship or character. My main goal is just to improve the reliability of this wiki.

Retrieved from "https://glee.fandom.com/wiki/User:Siradia?oldid=2504148"
Community content is available under CC-BY-SA unless otherwise noted.