William McKinley High School for the Performing Arts is a fictional school and one of the main settings in the show. The school is named after William McKinley, the 25th President of the United States, who was born in Niles, Ohio. The school is supposed to be located in the city of Lima, Ohio, however no school in Lima is actually named McKinley. In Ohio, there are McKinley High Schools in Canton and Niles.

The school mascot is the Titans, and the school colors are red and black.

In Dreams Come True, the school becomes arts-oriented after Superintendent Harris made a pitch to the school board following New Directions' victory at the 2015 Nationals competition.

The school has many classrooms, a faculty lounge, a music room and an auditorium named The Finn Hudson Auditorium. Sports facilities include a football field and track, a baseball field, a gymnasium, and a weight room.

*Transferred; most likely not graduated yet

*Didn't graduate; dropped out **Transferred; graduated from a different school

The school's Glee Club was called New Directions, and ran for four years (from 2009 to 2013, 2014 - present) and in their first year, they won Sectionals but lost Regionals to Vocal Adrenaline. The next year they tied with The Warblers at Sectionals and beat them and Aural Intensity at Regionals, but failed to place at Nationals. For there third year, they blazed through Sectionals and Regionals, and also prevailed in defeating Vocal Adrenaline for first place. For their final year, they lost Sectionals, but, due to a technicality, they were allowed to advance to Regionals, which they won, and at the 2013 Nationals, they lost to Throat Explosion. Rachel Berry and Kurt Hummel, two graduated members, rebooted the glee club (with the same name) the next year (which is 2014). It was later seen in the second part of the series finale (Dreams Come True) that the New Directions won the 2015 Nationals, their second victory ever. This victory assured New Directions' permanent status in the school and even changed the school's main orientation: the Arts, as said by Superintendent Harris. In consequence, three more glee clubs were created (which includes the revival of The Troubletones), Will becomes the new Principal, and Sam is appointed as the new director of the club, which now has more than thirty members.

The cheerleading squad are called the Cheerios and are very successful, having won Nationals seven times in a row. Unlike the cheerleaders, the football team wasn't successful, until Coach Shannon Beiste came and taught the team about winning. The school also has a basketball and hockey team but there is little known about them. We do know that Dave Karofsky was on the hockey team and Finn, Matt, Puck, Ryder, and Jake are/were on the basketball team. 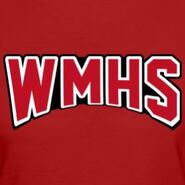